The High Sierra Electronics, Inc. 330X Series of ALERT2 Repeaters/Concentrators supports ALERT2, the next generation of wireless communication protocol for use in real-time hydrologic monitoring systems.

High Sierra Electronics 330X Series of ALERT2 Repeater/Concentrator supports ALERT2, the next generation of wireless communication protocol for use in real-time hydrologic monitoring systems. Many configurations add concentrator capability which means that the unit will also receive ALERT data and retransmits it as concentrated ALERT as defined within the ALERT2 Protocol.

The 330X Series of Repeaters/Concentrators are offered in three different types of enclosure with a variety of options available in each of the different enclosures. Refer to the Ordering Matrix for more details.

One of the great advantages of the ALERT2 Protocol is the use of TDMA (Time Division Multiple Access). This allows a network design which assigns specific time slots for every gauge and repeater’s transmission. The result is virtually no data loss due to data collision which is a common occurrence in larger ALERT systems.

For existing ALERT Systems transitioning over time from ALERT to ALERT2, a Repeater will also need to operate as a Concentrator. This can be accomplished either through the inclusion of an internal ALERT receiver/decoder, or the ALERT data can be imported via serial cable from an existing ALERT repeaters if it is equipped with a serial output stream. If the ALERT receiver is internal the Repeater/Concentrator will be equipped with three radios; one to receive ALERT2, one to receive ALERT and a third for ALERT2 data retransmission. When the system design permits half duplex, then a single radio can receive and retransmit ALERT2 messages.

All HSE ALERT2 Repeater/Concentrators include an Ethernet port. Data can be exported via the Ethernet port to any Ethernet ready device such as a router or cell modem for transmission to the system base station.

Any unit that includes internal ALERT concentration capability also offers the availability of sensor inputs. The range of sensor inputs is identical to the sensor range of the HSE Models 3306, 3316, and 3512 and include battery and GPS status reports for the repeater. Power requirements vary depending on the Repeater/Concentrator configuration and the anticipated volume of data to be re-transmitted. Most sites will operate effectively with a 75 Watt Solar Panel and 36 Amp hours of battery capacity. If needed, a High Sierra Electronics Applications Engineer can calculate the required power system given the specifics of your site. 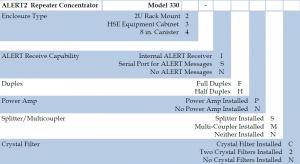 For example, a 3302-IFNSN would specify a Receive antenna split between ALERT and ALERT2 Receivers, operating in full duplex without a Power Amp or Receive Crystal Filters in a rack mount chassis.

Each Model number includes a five letter suffix indicating the exact configuration of the unit.

The second letter in the suffix indicates whether the Repeater/Concentrator will operate in full or half duplex mode. Full duplex means that the Repeater/Concentrator will receive and transmit simultaneously. This mode requires at least a 1 MHz separation between the transmit and receive frequencies and adequate vertical separation between the transmit and receive antennas. Half duplex means that the unit will not receive while transmitting. In most ALERT2 Systems the use of TDMA time slots will enable all the data throughput needed in half duplex mode. An “F” in the second position indicates full duplex and an “H” indicates half duplex.

The fourth position in the suffix indicates whether or not an antenna splitter or multi-coupler is in use. These devices allow two receivers to utilize a single receive antenna. The splitter is a passive device that does not draw any power but does introduces a minor amount of signal loss. While the multi-coupler does not introduce any signal loss it does draw power and therefore most commonly used at AC powered sites. An “S” in the fourth position indicates a splitter is included, an “M” indicates that a multi-coupler is in use and an “N” indicates that neither is used.